Are You Above Average? 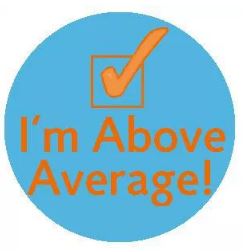 I wore what I thought was self-awareness like a badge. It turns out I’m not as smart as I thought.

Most of us think we are above average. In a survey of 1 million high school students, 100% rated themselves as at least average in their ability to get along with others. 60% believed they were among the top 10% with this skill.

When asked about their leadership qualitiess, only 2% of students admitted to being below average.

College professors weren’t much better. 94% said they did above-average work.

Welcome to the Bias in Your Brain

This is literally called “the above average effect.” You’ve seen it show up all around the office. Perhaps like me, there were times when you wanted to stick a pin in someone’s over-inflated sense of self. The truth is that we’re just as guilty ourselves — and just as unlikely to see it.

We all think we apply the scientist’s approach: gathering evidence, looking for patterns, forming theories to explain what we see, and then testing these.

What’s true is that we take the lawyer’s approach. We form an opinion and then look for information and experiences that reinforce this. And we also tend to discount data, people and situations that contradict our beliefs.

How Motivated Reasoning Supports Your Bias

This is called “motivated reasoning.” Theoretical physicist Leonard Mlodinow writes “this helps us to believe in our own goodness and competence, to feel in control, and to generally see ourselves in an entirely positive light.”

We believe we’re looking at the facts. But what we’re seeing is a curated version of them, designed to support our worldview. But not so outrageously wrong that our conscious minds won’t buy them.

Neuroscience has proven that we all make decisions in our emotional brains and then back and fill with reasons from our human brains.

When talking with a job candidate, the interviewer makes a subconscious decision about whether or not she feels a connection with this person.

If so, without realizing it, she uses motivated reasoning to support hiring him. The qualities he has suddenly become more important to doing the job successfully — and the skills he doesn’t have automatically are discounted.

Research shows that people with an accurate opinion about themselves tend to be somewhat depressed, have issues with self-esteem, or both. On the other hand, people with an overly optimistic view of themselves are normal and healthy!

Here’s how Mlodinow puts it. “As you confront the world, unrealistic optimism can be a life vest that keeps you afloat.”

Know this about yourself. Your subconscious is looking for and presenting evidence to your conscious mind that is biased to agree with your worldview. It does this to support your good opinion of yourself.

This means that all of the people you disagree with are not fools or uninformed or deceptive. They’re just doing the same thing to support their own positive views of themselves.

Want to know other useful ways your brain is unconsciously influencing your decision-making at work? Let’s talk.