Are You Scolding Your People? 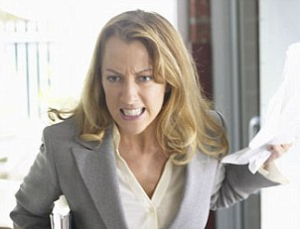 Before staring Wordsmith 25 years ago, I worked at the world’s largest investor relations agency.

The chairman had a fondness for sending memos to everyone when one of us screwed up. He would identify the mistake (and sometimes the person responsible) and tell the rest of us we’d better not do the same. It seemed he thought we were all just waiting to create a similar mess, and he was the only one standing between us and this abyss.

I used to call that the “stooge slap.” It felt as if he had put us in a single row and was slapping our faces all down the line, á la the Three Stooges.

It’s true: there are some things you don’t want your employees, clients or partners to do. But how you express this can actually lead them straight to the unwanted behavior. That’s because you said one thing and their subconscious minds heard something else.

Your Office as the Petrified Forest

Here’s an interesting study. At the Petrified Forest National Park, researchers put out secretly marked pieces of wood along a popular path. Later, they put up a sign warning visitors not to take wood as souvenirs.

Before the sign was in place, people took about 3% of the wood over the next 10 hours. After the sign was up, thievery nearly tripled, to 8%.

What You Say and What They Hear

First, it appears the sign made visitors aware that people walk through the forest and steal wood. For some, this became a group norm and acceptable behavior. When the sign wasn’t there, fewer tourists thought about doing this.

Second, we know our subconscious mind can’t tell the difference between a positive and a negative message. Once it becomes aware that the conscious mind wants something — whether or not this is a good idea — the subconscious looks for ways to get it.

What we intend as a warning suddenly becomes a call to action.

This and other studies show messages that condemn but still highlight an unwanted behavior are common. The problem is they often elicit exactly the action we don’t want.

Having a Toddler’s Brain

How many times have you seen this? A parent warns a toddler not to pick up that cookie, then scowls and starts a stare-down contest — only to see the boy grab and take a big bite out of one?

This happens a lot at work. Whenever you tell someone not to do something, you let that person know that others — maybe many people — already are doing it.

The next time you feel the urge to admonish someone — or a group of folks — against doing something, STOP. If your goal really is to prevent a certain kind of activity, instead talk about what you want to see or create.

Because research shows that when your mother asks, “If all of your friends jump off a cliff, would you do it, too?” the answer is “Yes!”

Want to communicate in a way that motivates people to take positive action? Let’s talk.