Are You the Only One Who Cares about Your Message? 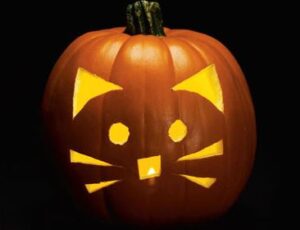 Last Halloween, my husband Larry and I were looking forward to carving a pumpkin with our then two-year-old grandson, Wyatt.

While we were preparing everything on the kitchen table, our daughter Lauren gave Wyatt an iPad, so he could watch his favorite kitty video until we were ready.

When the alarm went off after his allotted five minutes, Lauren took the iPad and told Wyatt it was time to carve the pumpkin.

His round eyes welled with tears. “iPad kitty back!” he sniffled.

No matter how we encouraged him to join us, Wyatt wasn’t moved. And we all ended up disappointed.

This story points up two important ideas about persuasion.

Watch for the Contrast Principle

Put simply, this means people are greatly affected by what they are doing before you request something from them.

For example, in one study, college students were asked to rate the relative attractiveness of photos of average-looking people.

Half of the group had been watching a TV program with models before the experiment. They were more likely to rate the people in the pictures as less good looking compared with students who watched a different program.

That’s why carving the pumpkin lost out big time for Wyatt. He’d never done this before, so wasn’t looking forward to it as the rest of us were. He already knew he liked the kitty cartoon — and wanted more of that.

Too often we devote too much time to coming up with messages about what we want employees, current and potential clients, and other business partners to do. We practice these messages until they are polished to a sheen. And then we bask in the glow.

The problem is that we’re too focused on ourselves and haven’t spent enough time considering what interests the people we’re trying to reach. And then we’re shocked when we get the “wrong” outcome.

Here are the three things people spend most of their time thinking about: money, health and love. (In Wyatt’s case, this was love of a video kitty). It would certainly help if our messages were tied to these things when we want to interest others.

We were so looking forward creating Wyatt’s first Halloween pumpkin. It never occurred to us that he would rather do something else.

(This has now worked its way into my lexicon. Whenever I’m not getting what I want, I stick out my lower lip and whine, “iPad kitty back!”)

What are the people you’re trying to reach saying when they hear from you?

Knowing what they’re doing before they get your message, and what’s in it for them, gives you great info to develop ones others want to say “yes” to.