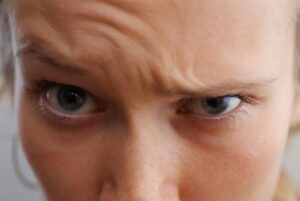 As part of my research before starting communication mentoring with a new healthcare executive, I interviewed some of her colleagues.

One of them was trying to be candid—but nice. “She has a ‘tell,’” the woman said. “You can always see what she’s thinking by the expression on her face.”

The executive told me, “People say I can be intimidating. I really don’t see myself that way.”

“You have what’s popularly called ‘resting bitch face,’” I told her.

She looked puzzled. “I’ve never heard that term before,” she replied.

“That’s because everyone’s afraid to tell you,” I answered.

She needed a leadership communication tune-up. Do you?

The Neuroscience Behind RBF

Your “resting face” is the expression you wear when listening to someone else, or not speaking or acting.

Two parts of our brains are cued into reading this. First, the fusiform face gyrus, which recognizes faces. Second, parts of the right parietal cortex, which analyze facial expressions. The latter categorizes them into six emotions: happy, angry, sad, scared, surprised and disgusted.

In the 1990s, researchers began lobbying to add a seventh category: contempt. This is a mashup of anger and sadness, directed at those who are deemed “beneath” you. It shows up as lips and brows not quite angry or sad, and lips tightened and raised more on one side.

We have a very strong reaction to real or imagined contempt. While we can process the other six emotions from others and move beyond these, experiencing someone’s contempt stays with us for a long time. This makes us hypersensitive to even a hint of it.

RBF Shows Up as Contempt

Noldus Information Technology developed software that could analyze emotions present on faces. Then it did some research on RBF. It analyzed “normal” resting faces and compared these to clear cases of RBF (including such celebrities as Kanye West and Queen Elizabeth).

In the normal group, contempt registered as about 3% of the emotions expressed. In the RBF group, this showed up nearly twice as high: at 5.76% of total emotions registered. Meanwhile, our unconscious mind is leaping to the assumption that this person is contemptuous of us.

Sexist Name for a Universal Condition

The Noldus research indicated that men are just as likely to have RBF as women, despite the reference to “bitch,” Many have pointed to the inequity of this term. My personal favorite was country singer Kasey Musgraves, who said a more accurate term would be “resting this wouldn’t bother you if I was a guy face.”

This is my soapbox for calling RBF by a new name: “resting judgment face.” Body language accounts for most of the impression we form about people when we’re in their presence. If people appear to be frowning or smirking at us, our brain—which already has a negative bent—assumes we’re being judged harshly by people who believe they are superior.

Not on My Face!

Like the healthcare executive, most of us pay little attention to what our faces are doing—or telling others—when we’re not speaking. If you want a lesson in this, watch any State of the Union address. Look at the vice president and the speaker of the house seated behind the commander in chief. Even these schooled politicians clearly take brain vacations or appear judgmental.

Want to check out your own resting judgment face? Go to Noldus’ RBF testing site, download your own image, and see what comes back: https://www.testrbf.com/.

If you find this is an issue for yourself—or know someone else—tune in next week for Part II. I’ll share the recommendations I made to the healthcare executive and to others who want to get their faces back.