"Sorry" Seems to Be the Hardest Word 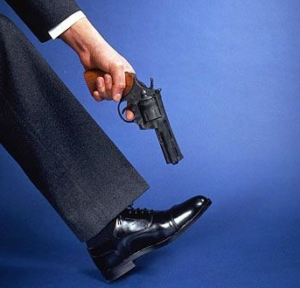 My husband and I play this game.

When he’s incensed about something—such as someone cutting him off in traffic—he’ll say, “I’m sorry, but that woman is a terrible driver and shouldn’t be on the road.”

That got me thinking about what a poor job most of us do with apologizing—particularly at work.

As leaders, we appear to have a poor relationship with “sorry.”

Research indicates that women apologize more than men do. And—no—it’s not because they feel powerless and are trying to curry favor. This happens because their threshold for what deserves an apology generally is lower than a man’s.

Inadvertently bumping into someone in a crowded hallway, a woman is more likely to apologize than a man is (in part, because she has a different view of personal space). But a study found that both sexes will apologize 81% of the time they believe they should. Women just think “should” happens more often.

Apologizing So Others See They Should Apologize to You

Then there are the times we apologize because we believe someone else should be saying they’re sorry to us.

When someone speaks too loudly in the next office or cubicle, we’ll say, “I’m sorry, but I couldn’t help overhearing what you just said.” Mostly we want them to say they’re sorry to us because they were using their outside voice inside the building.

Sometimes modeling an apology works and people get the point. Other times, they say, “Oh, that’s OK.” They accept our apology, missing our point, which incenses us more! (Maybe they’re part of that 19% who don’t say they’re sorry even when they know they’re in the wrong …)

Apologizing Instead of Cursing

This is what my husband—and so many of us—will do. It’s more polite to pull out the “I’m sorry, but …” of righteous indignation than to call the perpetrator nasty names while getting apoplectic. Here, too, we get to keep the higher moral ground.

Apologizing to Get Ourselves off the Hook

There are times we screw up—such as getting a report late to someone—and hand it in with an apology. Sometimes we keep screwing up by offering a long, involved excuse that shows it really wasn’t our fault. All of the forces in the universe conspired against us, and no human could have overcome these.

Then we expect people to absolve us because we were polite enough to apologize. Can’t they see we’re good people? And we can get miffed when they don’t immediately oblige.

Apologizing for the Wrong Thing

Sometimes it’s easier to say we’re sorry for a lower-stakes mistake than to admit responsibility for something worse.

That late report? Maybe the person you were supposed to give it to went into a meeting blind and got trounced by a client. Our defense when that person returns to us looking owl-eyed? “I said I was sorry!” (We sound like a whiny teenager—and how attractive is that.)

Apologizing to Improve Ourselves

Apologies only have meaning when three things happen:

1) We are sincerely sorry for having messed up

Otherwise, it’s all just meaningless hot air—for which we ought to be sorry!