Turning an Anchor into a Sail 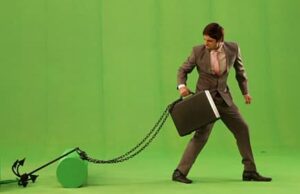 Have you been shopping this holiday season?

Maybe you saw the $150 price tag for a pair of jeans your teenager wants and thought, “That costs twice as much as I used to pay for my jeans at that age. No way I’m spending that much!”

I don’t advocate buying high-priced stuff. But I can say you’ve just been sunk by the anchoring effect without even knowing it. And it won’t be the last time …

There are plenty of brainiac definitions of the anchor effect. My goal is to keep this one simple so you can use it.

When making a decision, you’re overly affected by the first piece of information you hear or remember about the subject. Unfortunately, many times it’s irrelevant to the task at hand. That means you end up making a poor choice.

There are lots of experiments on this. Daniel Kahneman, in Thinking, Fast and Slow, mentions students spinning a wheel he’s weighted to stop at the numbers 10 or 65. Then he asks, “Is the percentage of African nations among UN members larger or smaller than that number?” The follow-up question is, “What is your best guess of the percentage of African nations in the UN?”

It’s obvious that the 10 or 65 aren’t at all related to the questions being asked – the students think these appeared by chance. But they were influenced by them. Those who saw 10 averaged “25%” as their answer, while those seeing 65 averaged “45%.”

It means the students “anchored” their decision to a meaningless number. This happened even when people were told to ignore the number – and swore they did.

The folks selling everything from those jeans to a house know about the anchoring effect. Once you see that price, you’ll use it as the yardstick for determining your response.

Now you notice that the jeans are on sale for 20% off. Or the seller of that house is willing to come down $50,000. You feel like you just got a deal! This makes you ignore the important question: where those items really worth the price you paid? Or were you unduly influenced by the price set by the seller?

Dragging an Anchor Around Your Office

You’re doing this to other people all of the time, too. Let’s say you’re creating the annual company or department budget for next year, and you ask people, “Should we increase spending on this area by 5%?” You’ve just anchored them. Their decision will be based on “should this be higher or lower than 5%?”

And you now know if you’d used 10%, their answers automatically would have been higher … (Unscrupulous folks will use this to set sales goals with their staffs.)

What this means for us as leaders is that we shouldn’t be asking leading questions. No more pulling numbers out of the air and expecting good decisions.

Carefully consider the anchors you drop with your people. Use ones that have them sailing in the right direction.