What Being in a Musical Taught Me about Teamwork 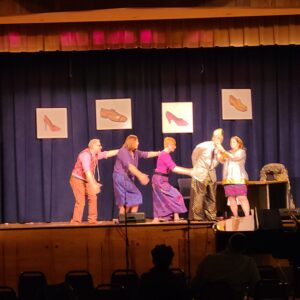 Three Lessons to Make You a Better Leader and Player

I auditioned for a community theater musical on a lark.

The writer/director heard me sing and encouraged me to try out. “All you have to do is bring some sheet music,” he said.

“You don’t understand. I don’t do sheet music,” was my reply. He reached out several times to make sure I signed up to audition. Afterward, I left—thinking that was probably it.

Then the call came. Not only was I in, they gave me a character role with singing and dialog. Here’s what I learned that may help you.

Lesson #1: Everyone Has Self-Doubt

Getting to know the other cast members, it became clear: I was the least experienced at acting, singing and dancing on stage. These people were regularly performing in plays.

My last role had been as the female lead in high school. I’d been in the church guitar choir in college. (When the musical director for this musical asked, “Who are my sopranos? Altos?” all the other women raised their hands without thinking. I had to guess.) And my dancing experience ended with ballet lessons at age 10.

The first big challenge was to memorize the lyrics for the opening song. It seemed to be taking me forever. I thought, “Maybe I’m just too old to do this!”

When I admitted that to another actress, she said, “I feel the same way! But we just keep working on this. Don’t worry: it will come.” I was grateful not to be alone.

These people had diverse personalities. Those who seemed to know everything. Those who were giggly and chatty and had to be reminded to pay attention. Those who were very abrupt with their comments It could be easy to get impatient with them.

After I got over my “I would have done that differently” head trash, their gifts became clearer.

The know-it-alls were very detail oriented. They noticed things the rest of us would have missed. And the show was better for us hearing and acting on what they caught.

The chatty ones raised the energy level in the group. This was particularly helpful near the end of long rehearsals, when the rest of us were starting to sag.

The direct, no nonsense ones shared important insights—once I let go of their tone of voice. When I listened for content, it was clear they really did want to make the show better. It was my own insecurity that interpreted their comments as judgmental.

Lesson #3: Fess Up When You Mess Up

After the opening performance was over, I needed to return my lavalier mic to the tech team. The show had been exhilarating. Afterward, my conversations with friends in the audience were fun. But now I was pooped. I struggled a bit with untangling the mic cord from my clothes.

One tech professional looked at me sourly. “That’s an expensive piece of equipment,” he said. “You should ask for help when you need it. Dangling it like that could make it break.”

I felt so ashamed: not realizing I’d been so cavalier with the lavalier. The sound of his voice beat me up all the way home.

As I was washing off the stage makeup, it occurred to me that he hadn’t said those things to make me feel badly. He just wanted me to be more mindful of the mic.

The next day, I made a point of bringing the mic back to the same man.

“You need to know I heard what you said last night,” I told him. “So I asked for help in taking the mic off today. And I want you to know your words will have a lasting impact on me. Whenever I’m speaking and use a lav, I’ll pay more attention to handling it respectfully.”

Then I listened as he explained how temperamental some of the mics were. And he was very mindful that they cost $700 a piece. We parted with smiles on both sides.

The snarky voice in my head now was silent. This worked better than the alternative: saying he was unfair and calling him a jerk.

Recognize Your Team in This

It’s true: after the play closes, it’s unlikely this group will get together again. Chances are good you’ll have a more lasting relationship with your teams.

But it still helps to know that most people—even the most experienced—have their own insecurities. When you admit yours, they can share theirs. This can bring you together.

That people you initially find irritating can make important contributions. This often happens when you focus on what they’re saying rather than the delivery.

That admitting when you screw up, and telling people what you learned from them, can create better working relationships.

I’ll miss everyone at the end of our run. They expanded my vision and made me a better person. Using these simple lessons will give your teams the chance to do the same for you.