What If We Stopped Hiding Out? 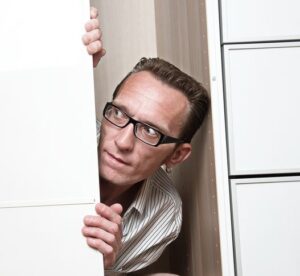 A friend told me a job search horror story. My initial reaction was “How dare they treat her that way!”

Then I started thinking about how I can make similar choices that not only diminish others but me. So I realized it’s time to deal with my own awareness issues.

My friend was ready for a final job interview on a Tuesday. An hour before, the interviewer called to say the company’s computer was down so they needed to reschedule. My friend asked when this could happen. The woman responded that she would call the next morning – then didn’t.

My friend started calling in the afternoon. When she finally reached the woman, she heard they decided to hire someone who was interviewed on Monday. “We really liked you, though,” the woman said. “We plan to expand, so can we keep your résumé on file?”

It’s not a stretch to guess that they canceled my friend’s interview not because the computer went down, but because they picked someone else. Maybe they were waiting for this person to respond to their offer and didn’t want to waste time talking to another candidate.

Instead of being honest, the woman avoided my friend by not calling back when she promised. And then she gave my friend a half-hearted gesture about keeping her résumé on file – probably to assuage her own discomfort about saying “no.”

Before we get all judgmental about this (the way I did), it’s time to think about whether we’re speaking from a protected place.

How Do We Give Bad News?

Here’s what I learned. How you give bad news is a measure of your integrity.

Too many times we shilly-shally about this – because we don’t want to feel uncomfortable about ourselves or be seen as the bad guy. Or face someone’s disappointment or anger. What we don’t think about is how we’ve made other people feel by leaving them hanging. And what this says about us.

Let’s Try This Instead

Set goals – It helps to answer these questions. What needs to happen in this conversation? Who do I want to be in delivering this news? What’s the outcome I want to see? What kind of experience do I want the other person to have?

Know your judgments – If you and the person have a relationship, then consider any difficulties you’ve had – and how that makes you feel about her or him. Choose not to let this color how you hold the conversation (give up “payback time”).

Be direct – This is bad news, and you can’t change that. Don’t sugarcoat it to minimize his or her upset or shield yourself from unpleasant reactions. If there is any good news about this, share it, but know this won’t offset the bad. (Who believes, “We have to break up but it’s not about you, it’s me.”)

Be honest – This isn’t just an integrity issue. It’s also about other people’s radar. Most of us know when we’re being lied to – or the truth is being fudged. Don’t add another negative to a already difficult situation.

Care – Many times this comes in the form of asking how the person is feeling about the news – and then actually listening. The biggest gift you can give to people in a tough spot is to help them feel seen and heard as they get through any initial shock. You may or may not be the “cause” of the bad news, but you certainly can be the best part of how it’s delivered.

Now that you have the right mindset, here are some practical tips on what to say and do: Stop Worrying about Having Difficult Business Conversations.

Don’t wing it. Even taking just five minutes will help you to be better prepared. You owe it to the other person – and to yourself.