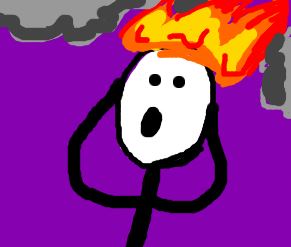 For months, my client—the CEO of a steel processing company—had been negotiating a joint venture with an international partner. The news release announcing this deal had finally been blessed by countless executives and attorneys. (See “The Hydrant Theory.”) It was scheduled to go out on Friday, after the stock market closed.

But my assistant Debbie, who was setting up the release for online distribution, hit the wrong button and issued it immediately: three hours early.

None of us knew this had happened until my phone rang. My CEO had just gotten a call from the partner company’s CEO. He saw the release online and was furious. He accused my CEO of not acting in good faith, and threatened to pull out of the deal.

“What the hell happened?” my client asked. “You’ve put us in a terrible position!”

Now I know I had lost two-thirds of my brain, and was only left with the “fight, flight or freeze” of my survival brain. I hated looking bad in front of my client—especially for something I didn’t do. Now the client might fire us—and I’d be blamed.

Yes: I’m sorry to admit I was thinking about my own discomfort more than the implications for my client.

And you bet I wanted to fire Debbie!

What I Wish I’d Known Then

How we handle other people’s mistakes is the mark of us as leaders. After more experience and research, here’s the advice I’d give that mess of a me from years ago.

Close your eyes and take some deep breaths. My brain was overstimulated, thinking the world was going to end. First, I needed to cut down on my sensory overload by shutting my eyes.

Second, I needed to ask what I was feeling. Dr. Dan Siegel, professor of psychiatry at UCLA, says, “Name it to tame it.” In this case, it was fear.

Understanding this would prevent me from wasting a lot of time and energy trying to convince myself I wasn’t afraid. It also could prevent me from choosing knee-jerk reactions based on that fear, rather than considering what made sense as next steps.

Find a safe way to vent. I’m not an altruistic person who speeds to forgive and forget. So I’ve created what I call “brown thought clouds.” If I were a cartoon character, this is the thought bubble that would appear above my head, which no one else can see.

I say all of the nasty, snarky, sarcastic things I want: to myself. And I smile at how witty, cutting and insightful I am. This helps me get that stuff out of my system. It also reduces the chances I’ll unwittingly spew my venom over everyone else around me.

Stick with the facts. Now I’d be calm enough to speak with Debbie. I could tell her what I know—the release went three hours early—and ask how that happened. Because this is just fact-finding, rather than judging, chances are good we can understand what went on without making each other crazy.

Work together on next steps that make sense. This situation was on fire. Debbie and I had to do what we could to control the damage right now. Then we needed to take a look at our alternatives. That way I could present the best ones to the client and make a sound recommendation—and Debbie would be onboard with helping because she had participated in creating the solution.

Take responsibility. Get over who pushed the wrong button! If I wanted the CEO to ever believe or respect me again, I needed to explain what we did, and say it was my fault for not standing there to make sure everything went right. Only then could I present the alternatives and suggest next steps.

Debrief without de blame. This is where Debbie and I could talk about the lessons learned and how we would work together to do things better. We need some distance from a situation before that can happen—because who can do this kind of analysis when their hair is on fire? And it certainly helps to have gone through most of the fix-it process to know if we should take those same actions again.

Yes: we’ve all heard these are linked. But I’ve found that there often is a rush to move from the mistake to the opportunity. Sometimes we jump into a flurry of activity to avoid taking responsibility or feeling badly about ourselves. Be honest enough with yourself if you tend to go there, too.

I was lucky. The client didn’t leave, and I didn’t have to fire Debbie.

Remembering this situation still makes me shudder. But it’s good to know that I have more tools to deal with the screw-ups that inevitably happen. And now you do, too.

Need other ideas on how to turn mistakes into a chance to improve things? Let’s talk.