Who's Your "Guy at the Table"? 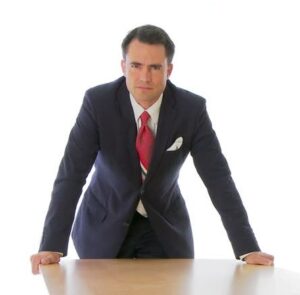 After giving a workshop on creating elevator pitches, I checked in with people as they left. One woman said, “This was really useful. Except this guy at our table wouldn’t stop talking. So some of us didn’t get the chance to practice.”

I knew this guy. (We all do.) I’d stopped by their table earlier and short-circuited him. But apparently he returned undaunted. This made me think …

Who’s Your “Guy at the Table?”

My first reaction was to get judgmental (I’m not proud of this). “Why don’t more women speak up for themselves? Sometimes we wait for someone to rescue us from a person we think is overbearing. Until then we sit there: silent and resentful victims.”

That took me back to an early job. My boss Jim called me into his office for falling short on something (I’ve repressed what it was). He never raised his voice. But I left that meeting eviscerated.

I returned to my desk, trying to figure out what happened. Jim hadn’t hollered at me, which is what I was used to when people got angry. That usually made me speak up – with information or to defend myself.

Instead, he’d used abusive terms in a calm voice. In the moment, I reacted to his tone of voice and body language (which weren’t threatening) rather his words (which were). And I left his office confused.

How Do We Deal with These People?

First, we need to deal with ourselves. It’s good to know your hot buttons or blind spots. I was fine with straightforward conflict and disagreement, but not quiet verbal abuse. Once I figured that out, I could create a strategy for the next encounter.

When this happened, I sat in Jim’s office and listened carefully to his words. I kept my voice as low and measured as his when I responded. (Whoever raises their voice first, loses.)

As he spoke, I separated the “performance complaints” from the “personal attacks.” (Deep breathing helps.) I addressed the job issues: agreeing with him when he was right, and sharing the facts when he wasn’t.

I didn’t address—or even really know—my feelings about his character assassinating language. Thank goodness emotional intelligence is a skill we can all learn!

Second, pay attention to what you want or need. Often we know we’re heading into these kinds of situations. So set a goal before you walk through the door. For me, that next time, it was, “I’m not going to let him make me feel like crap!” OK, I could have chosen something more positive: “I’ll show him I’m competent while listening for ideas to do a better job next time.”

What about those sudden, negative situations – like the guy at the table? Literally take a deep breath and ask, “What do I want to get out of this?”  If you want to practice your introduction and someone is monopolizing the conversation, then it’s your responsibility to interrupt.

Don’t confuse going after what you want with being selfish. Many times, others also benefit when you do this. A lot of other people at that table would have welcomed – and supported – a change of speaker.

If that young me was reading this, I would have said, “But I’m overly responsible! People rely on me all of the time!”

If you heard that voice in your head, I get it! I’ve spent a good part of my life being resentful (“Why doesn’t he stop talking and give someone else a chance?”) and superior (“I’d never act that way!”). So I know this approach isn’t very satisfying.

It’s like continuing to huff and puff behind a slow car in the passing lane: “He shouldn’t be in this lane – why doesn’t he move over?” You’re right, but that doesn’t change anything. Instead, get what you want by passing him on the right – and reduce your agita, too!

You did – at least two thirds of it! Download this article — The Search for Intelligent Life — Inside Your Head — on the steps for getting your brain back.