Whose Voice Are YOU Speaking In? 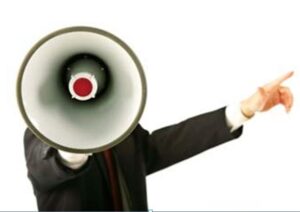 I took my first trip to England in college. A few days in, all the other students began working on their British accents. (They sounded like a nightmarish version of Monty Python’s Flying Circus.)

When someone asked me why I wasn’t joining in, I said, “Over here, my American accent is novel – so why try to sound like a Brit?” I didn’t know that the American accent was equally objectionable to a Londoner’s ears …

It’s fun to listen to a skilled impressionist. These people often take someone we know, add a little “over the top,” and we laugh at the results. (Melissa McCarthy’s character, “Spicey,” retired from SNL this week, is one example.)

But have you ever thought that your people may be doing the same thing with you? Or people outside your organization may be doing something similar with your company?

The Death of Language — and Connection — in Business

Earlier in your career, you probably received some missives from “corporate” (kind of a one-word caricature, isn’t it?). Maybe you even struggled with what it was telling you, or asking you to do, because neither was clear.

Then you probably sniggered at how stilted and lifeless it sounded. There couldn’t possibly be a living, breathing human at the other end of it!

Now that you’re the leader, have you checked what’s going out under your name or coming from your lips?

And the Lawyers Come Rushing In

It’s true: there are times when you’re forced into legalese to reduce business risk. But too many times we use this as an excuse not to think or interact with others. I knew a general counsel whose goal was that an annual meeting last 20 minutes and have no questions from shareholders.

Sometimes we don’t want the messiness of having people question our messages. We’re into push mode: shove the information out there and move on to the next thing.

But what does that tell your people, partners and clients about how valuable they are to you? Can you say, “Necessary evil?”

Bring yourself back into your communications, in- and outside your company. Speak in your own voice: as a leader who cares about all of your stakeholders. Get back to your job of persuading people by inspiring them, rather than baffling them with BS.

Make that younger version of you proud to have grown into you. And when people lampoon you, increase the chances that it’s a mirthful tribute rather than a snarky satire.

Need help putting the “you” back into your communication? Get the straight talk — and benefit of an expert on the neuroscience of persuasion — that translates into a higher ROI.