Why We Need to Stop "Win"ning 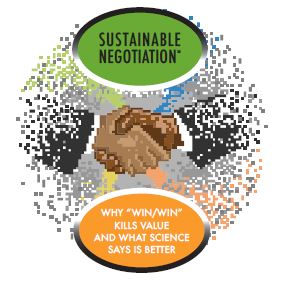 If you were working, you sat at a typewriter—because the first IBM PC was just being invented. You used couriers to share printed documents fast—because faxes weren’t yet around. And if you were out of the office and wanted to make a call, you looked for a pay phone (and a supply of quarters).

Here’s something else you have outgrown since then.

That year is when Getting to Yes came out. Even if you haven’t read it, you know the concepts of win/win, win/lose or lose/lose. This quickly became—and still is—the business negotiation bible.

The book was written by two lawyers from the Harvard Negotiation Project. The ideas it espouses were designed for conflict resolution and diplomacy—not for business. But there was nothing else out there, so businesspeople glommed onto it.

Now that you know this, you can see it in the language we take for granted. We speak about “our opponents” or “the other side.” If a conflict doesn’t already exist, then terms like this help to create it!

Who Is Winning the Most?

Research indicates most people don’t really believe win/win works. We’re all certain that we are trustworthy. However, we’re just as sure our fellow negotiators are trying to get more than they’re giving. That means too often we’re playing not to lose.

Even 20% of the people who are professional negotiators say that they don’t enjoy this process (not to mention the 87% of us who are apprehensive about salary negotiations).

We’re right to be skeptical. When was the last time you watched a sporting event and saw the last two athletes or teams shake hands and agree they had both won? Or two Olympians stand together on the highest podium, each raising a gold medal?

As long as we talk about “winning,” we imply a loser. And we’ll do anything not to be that!

What if the object of a negotiation was not to sign a contract—and have someone else come in to implement and enforce the agreement?

What if it were about creating a partnership—where there was give and take because everyone was in this together?

And by doing this, we were able to lock out our competitors beyond the foreseeable future—because they didn’t have access to the resources we and our partners provided to each other. Sound too good to be true?

Then check out a concept called Sustainable Negotiation. This was developed by Dr. Eliane Karsaklian: an international academic and businesswoman.

She and I are looking for innovative leaders who want to pioneer this approach: internally, nationally and internationally.

Find out more and reap the benefits of the first major advance in business negotiation in 16 years.