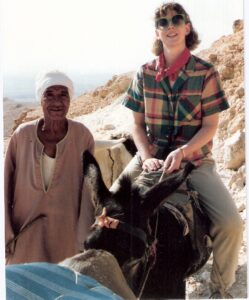 What This Means During Election Season

I used to believe that good communication could solve every problem. Just get two people in the same room, help them see each other’s humanity and what they have in common, and we could solve the world’s problems.

Then I traveled to Egypt in my 20s. I walked around Cairo, with my arms and legs covered (in the 100+ degree heat) to respect local customs.

Egyptian men would make sucking sounds at me. My expatriate friends explained this happened because all western women were seen as prostitutes. In that moment, I didn’t want to bridge the communication gap with these guys!

Empathy is the ability to understand and share someone else’s feelings.

Infants are born with it. When they hear another baby cry, so do they. Researchers believe that about 50% of empathy is genetic. The balance is learned, primarily through mothers (with whom most children still spend more time).

As a kid, I saw the painting of an American Indian in my grandparents’ house. At the bottom, I read the line “Walk a Mile in My Moccasins” and thought, “I do that.” Wrong! It’s really hard and vulnerable work.

How many times have we changed the channel or clicked on another page to avoid the ad for abused animals, or hurricane victims, or children with cancer appears? We don’t want to be touched (or have our wallets touched).

Maybe you heard about this frightening study. It indicated that the levels of empathy in American college students dropped by 48% between 1979 and 2009.

Before you start bashing the 2009ers, consider this. Recent research indicates adults say they value empathy, but only in the right situations.

We Don’t Believe Everyone Deserves Empathy—and Bash the Empathizer

In a 3,000+ person U.S. study, people saw videos of someone sharing a personal experience with another. These could be negative, such as stress from work, or positive, such as a promotion. The person on the receiving end either responded with empathy or was neutral.

Then participants rated their impressions of the responder: how likeable or warm this person was.

Here’s the twist. The sharer was portrayed either positively or negatively. In one study, participants learned she worked for a white nationalist organization. In another, she worked in a children’s hospital.

Researchers discovered this mattered—not for the woman, but for the person expressing empathy.

People only liked the empathizer if they liked the person who was receiving empathy. When they had a negative impression of the recipient, there were instances when participants preferred the responder to condemn rather than show empathy with the person!

We only want people whom we deem “worthwhile” to get empathy. And we think less of the people who give empathy indiscriminately.

This week, as election results come in, be aware of your own use of empathy. Choose to be open to those who have opposing views. Be respectful of those who feel loss because their candidates didn’t win.

To do this means you can’t worry about how others perceive you for reaching across the aisle. Be the empathizer who does this because it’s right—not because it makes people like you. It’s more important that you like yourself.