How to Avoid a Pie in the Face During Negotiations 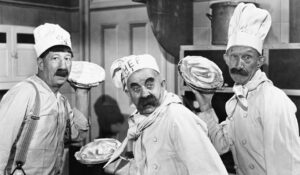 If negotiation were a pie chart, it would have three slices: win/win, win/lose and lose/lose. We all say we’re for option #1—until the conversation begins. Then fear can set in.

“Are they getting more than we are?” “We’re trying to be fair and they’re not.” “Why can’t they see our side of things?”

In this situation, most of us can get that itch to get a little more. Here are some ideas to help reframe “winning.”

Roger Fisher and William Ury offer some useful information in their book Getting to Yes. This really begins with a definition of a successful negotiation. Theirs has three parts:

This seems simple, but it can be a tall order. (Have you ever tried to negotiate with a teenager whose mantra is, “That’s not fair!”)

There are two basic approaches you may take to the situation.

Pitfalls of the Common: Position-Based Negotiation

This involves each side starting with a concrete result it claims it must see. Each person takes a position, gives it up as he or she makes a concession, and then takes a series of other positions until reaching a compromise. Maybe they’ll get to that fair settlement; maybe not.

Now we worry about other people being more persuasive than we are. Or hoodwinking us. Or strong-arming us.

That leads many of us to get defensive about our position, argue for it — and (most counterproductively) identify ourselves with it. Now we’ve moved beyond what we say we wanted and are involved in a secondary struggle not to lose face. And what we’ll do in this situation can end up damaging any ongoing relationship.

Now multiply this angst and pressure and posturing if there are more than two parties involved.

Benefits of the Different: Principles-Based Negotiation

This focuses on exploring each party’s underlying interests and looking for solutions that work for both.

Fisher and Ury believe say this process has four components.

Separate the people from the problem. “Be soft on the people and hard on the problem.” People should see themselves as working side-by-side: attacking the problem, not each other.

Invent multiple options for mutual gains before deciding what to do. “Consider them all and choose later.” It’s hard to develop the best solution when you’re under pressure. Set aside some time to brainstorm a wide range of options. At a later time, be creative about reconciling the different interests.

Insist that the result be based on some objective standard. “The standard should be independent of will. Reason and be open to reason. Yield to principle, not to pressure.” This prevents the fear that the loudest and most stubborn person will win. Agree upon a fair standard — such as market value or law — so neither side is giving in to the will of the other.

Principled negotiation reminds us to deal with each other as people, rather than “they.” Stop trying to see how much you can get and focus on how well you can get on. That will prevent you from ending up on the throwing or receiving end of that custard pie when you’re done!