People Don't Do What You Tell Them to Do 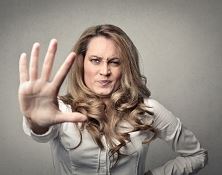 I can think my case for why a client should change a speech to make it more interesting to his audience makes this a no-brainer. But sometimes he still won’t do it.

Before we start mumbling about clients having all of the money and none of the sense, it’s time to look at the role we play in this no-winner – and choose something better.

We have this myth that people decide things rationally. That we actually use the “Franklin Method” (thanks to my uncle, Ben) of listing all of the pros and cons and then choosing the best option. For that reason, we think that making a logical argument in favor of our point of view will be persuasive.

When viewing (or hearing) a list of items — even ones that interest us — only two areas of our brains are engaged: the ones that recognize language. Unfortunately, those are in our cerebral cortex, which also is where our resistance lives.

People really make decisions in their emotional brains — and then they back and fill with “whys” to explain or justify this. If you want to be persuasive, that’s where you need to go to meet them.

Chances are it’s on what you want. But people do things for their reasons, not yours. As a teenager, did hearing one of your parents say, “Because I said so!” ever work?

Our first stop is to start listening for — and caring about — what other people want.

Here’s the truth. You can ask good questions, bad questions, closed- or open-ended questions (although it generally helps when you use the first and last approaches). None of that matters if you aren’t listening. And we can always tell, can’t we?

You can ask “D” level questions, but if you’re an “A” level listener, you can still get the job done. The reverse isn’t true.

I believe people wander around feeling chronically unseen and unheard. One of the most powerful things we can do to be more persuasive is to show we care about what they’re saying.

Get your body involved.

Learning theory indicates that 80% of people want lots of eye contact, so give it to them. (The other 20% are auditory learners who get freaked out when you look at them for too long.) Pay attention to their body language and mirror — don’t mimic — it. This builds rapport. (For those auditory learners: look at them and look away when speaking or listening. That’s probably what they’re doing with you.)

Nod your head as they speak, to show you’re paying attention. This is not the same as agreeing with them.

Paraphrase what they say. And use the words they use. Don’t rephrase — because that makes it about you, rather than them. It also can carry the judgment that what they said wasn’t right or good enough. In addition, paraphrasing lets them know that you heard what they said, and gives them the chance to clarify any misunderstandings.

And, if it’s really important, take notes. Then they see you’re truly interested. Plus studies show that all of us pay more attention to what we’re saying if someone is writing things down, so this improves the quality of the conversation.

This stuff really works as a strong way to begin any conversation where you want to create a connection. Give it a go and notice what happens.

Next month we’ll look at the second part of being persuasive. Now that you understand what someone wants, how do you to say something of interest to move them along the process of being persuaded.