Seeing My Own Hubris: What Alzheimer's Teaches Me about Communication 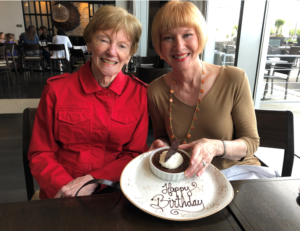 I used to think I was pretty good at this communication stuff. People would come to me for counsel on how to handle difficult conversations. Or create rapport, connection and trust. Or motivate their teams to work together.

Then came the day when my mother, who has Alzheimer’s disease, glared at me and said, “You’re a terrible daughter!”

It didn’t help that we were driving in a snowstorm, having just come from the hospital where my stepfather was lying paralyzed from having fallen and broken his neck.

My parents live in Minnesota and I’m in Chicago. I had to go back home for two days of client meetings and had arranged for live-in caregivers to be with my mother until I could return.

“I hope someday somebody forces strangers to come and live with you in your house, and we’ll see how you like it,” she spat at me.

Keeping my eyes on the snow swirling around us in the twilight, I muttered, “I hope someday somebody cares enough about me to find strangers to come and live with me when I need it.”

Reacting to the WHAT

As a neuroscience nerd, I know that moods are contagious. My mother’s angry voice and words were making me testy.

She continued to rant. “I can take care of myself. I don’t need anyone to live with me. My husband Tom will be home soon. Why are you doing this to me?”

This led us to an exhausting circular conversation about “we’re just trying to keep you safe” versus “I am safe and why are you forcing strangers on me.”

Then I shut down. There was no way to get her to understand, let alone agree.

Learning to Look at the WHY

Looking back a few weeks later, three things are clear.

First, I’m learning the truth of what the people who lead the support group I attend often say, “You can’t win an argument with an Alzheimer’s patient.” Then again, how many times have I ever won an argument with someone who didn’t agree with me? Even if I had, my mother would likely forget and start it again.

Second, I’m learning that all communication—spoken or behavior—from my mother is an expression of her emotions. This is the why.

If only I had been able to name the emotion for her. “Mom: I’d be frightened about having people I didn’t know come to live with me, too. And I’d probably be angry with my daughter for putting me in this situation.”

What if she had felt I understood what she was going through? Then maybe she wouldn’t have thought I was fighting with her—which, of course, made her want to fight back. (Contagious moods again.)

Third, I’m grateful that my mother still knows me, and I can remind her of that relationship.

By the time we were eating dinner that night, my mother’s fears had escalated to believing that I was trying to keep her from being with Tom.

She looked back. “No,” she admitted.

“OK. Then know I love you. Know I love Tom. And that I’d never do anything to keep you apart. Do you believe that?”

“Yes I do, sweetie,” she said. And we both smiled in relief. It was a shining moment of connection that I treasure.

Why Should YOU Care?

Maybe you, too, react to the moods of others who are disagreeing with you—or appear to be insulting or denigrating you.

You believe you know better, and they should agree with what you’re recommending or doing.

Dig a little deeper. What are they feeling that makes them speak and act this way? You might not agree with these feelings. But knowing them can get you out of reaction mode—and naming them can help the other person feel seen and heard.

At the end of the day, your relationship is the thing that matters. Not being smart, or right, or getting your way. Any other choice is really hubris.