Stop Being a Narrator! 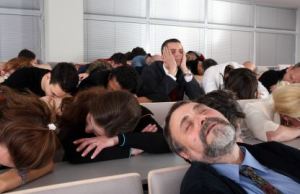 We’ve all heard someone tell a story that included, “Then I did this … and then this happened … and next we …”

Depending upon the situation, we stifled our yawns and controlled our eye rolls – or didn’t.

Read this: so you’ll never do that again!

Chances are good that at some point you had to read some books from the 19th Century. You may have encountered a narrator who called you “dear reader” – or some other device that reminded you that you were being told a story.

You’ll notice that doesn’t happen too much in fiction these days. And for good reason. We want to have an experience rather than have someone talk around it.

The business world is a real culprit on this.

Digging for the “News” in a News Release

A client and I were talking about his release. It had a subhead: “Fourth Quarter Highlights.”

I said, “Why don’t we use something more descriptive. How about ‘Sixth-Consecutive Quarter of Profitable Growth’? It’s your fourth quarter results release, so people know what period we’re talking about. Let’s show them your growth strategies are really working.”

“But this is the way we’ve traditionally done it,” he explained. “It’s what people expect.”

“But is it what they want? To wade through a bunch of bullet points to find out what happened?

“Is it what you want? To bury a key message rather than have it visible to people who just have time to skim your release? Or to miss an opportunity to pull them into a section because we’ve just said something interesting?”

I thought my position was convincing.

We say we want to connect with our audiences. Then we make choices that bore them – and don’t serve us, either. We tell – like a narrator – rather than show. Everybody loses.

It’s time to be mindful about our choices:

The best moment in most of our days is when we see a message, can hit “delete” and not give it a second thought. Do these three things to increase the chances that the people who should see your messages will give them a look.