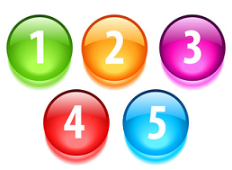 Why Our Brains Hate This

“I’ve got a few minutes,” said my boss, the VP of Communications. “Why don’t you come into my office and we’ll do your first annual performance appraisal interview.”

It was a statement, not a question.

I hadn’t expected this and wasn’t prepared. Now I was sitting on the other side of her massive mahogany desk. My mouth went dry. I held a pad of paper on my lap with my left hand and a pen in my right—mostly to keep them from twitching with nerves.

She glanced down at a few sheets of paper. Then she looked over her reading glasses at me and said, “Our company uses a five-point ranking system. One is unacceptable. Two is needs improvement. Three is acceptable. Four is good. And five is excellent. I have to tell you upfront that I never give anyone a five. Because that means there’s no room for improvement, and I think we can all do better.”

I thought, “The best I’ll ever do here is good? How arbitrary and meaningless is that?”

She later told me about a scale used by Jack Welch, then CEO at General Electric. “He has everyone ranked at the company this way. There’s the top 20% of performers. Then the middle 70%. And the lowest 10% get fired every year. That helps people stay motivated.”

I thought, “We’re grading people’s careers on a curve, like an exam? What kind of motivation is that?”

Now you know why I’ve only had one corporate job. (OK: there are a couple of other reasons …)

Our Brains on Numbers

According to David Rock, director of the NeuroLeadership Institute, here’s what happens when you tell people they rank below the highest mark. Their amygdala, which senses a threat, puts them into fight, flight or freeze mode. Now they’re unable to have a useful conversation about what’s happening and how to improve things. In “amygdala hijack,” they literally don’t have the brainpower.

Knowing others scored higher also demoralizes them. This has longer term effects. People feel higher levels of frustration. They are less willing to take risks: seeing stretch goals as an invitation to struggle, look stupid and fail, so avoid these. And they can start working against their colleagues.

Carol Dweck, professor of psychology at Stanford University, says ranked performance measurement systems also reinforce a “fixed mindset.” When we’re not at the top of the scale, we start believing that others who are were born with more talents and smarts. “I’ll always be a ‘two’ in this area, and there’s nothing I can do about it.”

What we want to encourage is a “growth mindset.” Here, people believe they can learn, grow and improve throughout their lives.

We all have both fixed and growth mindsets. There are areas of your life you really enjoy and are always looking to expand your knowledge and abilities. (I read articles on neuroscience because I want to learn more.) There are others where you don’t excel because you lack the interest or talent. (The world is a better place since I stopped playing the flute.)

We’ve all heard, “What gets measured gets managed.” Yes: it makes empirical sense to stick a performance number on a job responsibility and track this over time to see progress, or not.

But that’s not how the brain works—if what we want is to encourage growth and improvement.

Then there’s the whole psychology about those who are administering this tool. If they grade too high, are they trying to make themselves look better as supervisors? If they grade too low, does it mean they hired poorly or aren’t doing a good job of motivating their employees? As we saw with my VP: her rankings had at least as much to do with her as they did with me.

You’ll get better results by having a structured conversation to discuss topics like this: career growth, contribution, collaboration and innovation. Or have a guided conversation, where you ask employees about the goals they’ve set and how they see their progress.

We have a love affair with numbers because they can seem absolute and give the illusion that we can find the “right answer.” The irony is that once you stop keeping score with performance measures, you encourage exponential improvements.