What Getting Lost in Prague Taught Me about Communication 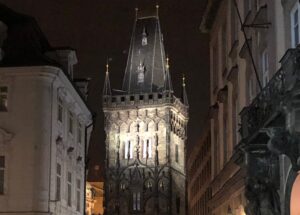 Maybe you know that sinking feeling.

It was 5:00 p.m. and dark. After sending me in conflicting directions, Google Maps stopped working. My phone screen read “Rerouting,” and then “No internet connection”—no matter where I turned.

In the gloom, people were rushing all around me. “Excuse me,” I said to many of them. Most didn’t bother to give me eye contact. Or they shook their heads and kept moving. Or they scowled.

I felt chilled in the windy 29 degrees. My thoughts began to swirl. What if I didn’t make it back to my hotel?

Take the Time to Prepare

I’d known for a few months about this trip. Friends who’d been to Prague said, “Don’t worry, most people speak English.” They sure didn’t that night!

A wiser me would have learned a few useful phrases. To say I was lost in a way a native could understand might have gotten me assistance earlier. It certainly would have reduced those unsettling frowns.

I kept asking. Finally, Ludmilla crossed my path and took pity on me. “I speak small English,” she said.

It would have been worthless to tell her I was staying at the Grand Majestic Hotel, since that’s not how it was pronounced in Czech.

When the cab driver brought me into town the night before, I noticed we’d driven past a big, well-lit building called the Palladium. If I could get that far, the rest of the way to the hotel would be easy.

Ludmilla shook her head. Then she paused and said, “Aw: Puh-LAH-de-um.” (I’d been pronouncing it Puh-LAY-de-um.) She started to give me directions for taking public transportation to get there. The idea of trying to do a tram or bus only made me more nervous. I just wanted to walk. I even pulled out a map to see how to do that.

Bless her for her kindness: Ludmilla decided to walk me to the Palladium. As we got nearer, I noticed some other landmarks. I tried to tell her I could take it from there, but she insisted on bringing me to that square.

Once we arrived, I thanked her and put my hand over my heart. Ludmilla smiled, waved, and went on her way.

Part of me considered just staying near the hotel the next day: to avoid getting lost and feeling frightened. But I was scheduled to take a ghost and legends walking tour that night.

In the morning, I went to the nearby museum on art nouveau poster artist Alfonse Mucha. By paying attention to more landmarks, I got back. Then, using the hotel’s WiFi, I reached AT&T to figure out why my internet wasn’t working. Fortunately, we were able to fix it.

And, to double-check, I walked to the meeting place for the tour while it was still light. That increased the chances I’d get there in the dark if my phone went wonky again.

So I got to see the House of Death and the Darkest Alley in the city, and hear tales of plague rats so large that groups of them would carry off babies (that’s what happens when you kill all the dogs and cats that are their natural predators).

The guide also mentioned the Czech Republic was the second-most atheistic country in the world (following North Korea).

He said that 1) having been over-run by the Hapsburg empire (forcing the mostly Protestant country back into Catholicism), 2) a brief period of independence after World War I, 3) being invaded by first the Nazis and 4) having been taken over by the Communists after World War II (until 1989’s Velvet Revolution) had made the Czechs skeptical and pretty dour.

So those frowns that were making me nervous were more about the people behind them than me.

Take Heart in the Face of the Unknown

After this stutter-start to my trip, I held on to two ideas. First: Things will go wrong, but I have the smarts and the resources to deal with it. Second: Wherever I go, there will be people of goodwill.

May these thoughts support you in your travels in and out of the office.