What Are YOU Emphasizing? 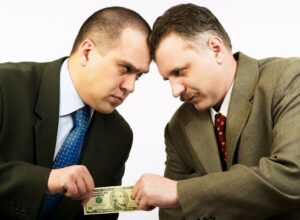 Moving Beyond the Blame Game

I was doing leadership communication coaching with a president—let’s call him Jim—who was the heir apparent at a large company.

He had a love/hate relationship with the chairman—let’s call him Ted.

Jim would spend a good portion of our time together complaining about Ted. I listened: because Jim needed a safe place to vent, and I gathered important information to understand their relationship.

Jim had a number of legitimate beefs. For example, Ted called him out during executive team meetings for glancing at his phone when emails came in. However, it was clear that nearly everyone else was doing the same: or actually composing emails on their computers during the weekly meeting. And Ted was saying nothing to them.

“What’s with the double-standard?” Jim asked. “It’s just not fair!”

And, once annoyed, Ted would let this bleed into other unrelated conversations, meetings and emails with Jim. Ted’s comments would be short and withering—and Jim was beginning to wonder if he should leave.

Carol Dweck, a researcher at Stanford University, identifies two types of these in her book Mindset:

Maybe this is giving you a “duh!” moment: of course we all should pick growth mindset. But it’s human nature to feel like a victim—like Jim—in the face of unfairness and unrewarded efforts.

For Jim, it was this: “Do I so want to lead this company, and execute my plan to make it more successful, that I’m willing to use Ted’s feedback as a way to help me grow?”

If he couldn’t answer that with an enthusiastic “yes,” then this wasn’t the right place for him. So no communication strategy, however effective, would work.

But Don’t Be a Doormat

Jim chose to stay. Our next step was to start using tactics that 1) gave him the information he needed and 2) prevented Ted from walking all over him.

He agreed to try two at his next meeting with Ted:

Get Useful Feedback. Ted would give Jim useless negative feedback that was too general, such as,  “I don’t like the flow of your presentation.” There was no way Jim could know how to address this.

Rather than getting defensive, he should say, “I really want to do better with this. Can you give me a specific example of what you’d like to see, so I’ll understand what you mean?” By continuing to ask for clarity whenever Ted’s responses were fuzzy, Jim would know what changes to make.

Watch the Tone and Speed of Your Voice. Ted generally spoke quickly—and got louder when he was frustrated. The mirror neurons in Jim’s head invited him to match Ted’s approach—because voice tone and quality are contagious. Then both of them would get into a cycle of escalating their volume and intensity. As the boss, Ted would always win.

Instead, Jim would keep a more measured pace and not raise his voice. The mirror neurons in Ted’s brain would pick up on Jim’s calm, inviting Ted to be less strident.

We all need to vent our frustrations. But if we stay in the world of complaint and unfairness, this can give us a fixed mindset. We can believe nothing we do can improve a situation.

Choosing to believe there are opportunities to better ourselves and our lot, and being open to trying new things to make that happen, are the signs of true leaders.

What happened with Jim? He sent me this note after his meeting with Ted: “Meeting went well today. You are good! Your strategy worked!”

Of course there will be future tough talks between these two men, with setbacks and progress. But Jim knows he has the ability to handle these and move in the direction of his growth (mindset) goals.